It doesn't have to be perfect to be wonderful

Finding the boat in Detroit meant that we would spend another winter in MN before we could head out of the Great Lakes. It turned out to be a good choice as we’d have the winter to get some things in order and have a nice long transition to living small.

We had the boat hauled out, the rudder dropped for repair and had her winterized until we could return in the spring. This is when we met Dean. Dean is the guy who can do anything and if he can’t, he knows a guy who knows a guy who can. So we got him started on adding a shrink wrap top to the boat as well as taking care of the cutlass bearing, prop shaft, engine mounts and so much more. It was nice to have some of those things taken care of over the winter while we were so far away. That didn’t keep Shane from traveling out there a few times just for a quick visit to “check on something” or “pick something up”.

While the temperature started to drop, we rented a small Airbnb in Fridley MN for the winter. For the first few weeks it was overwhelming to trip over all of the “stuff” we still had. After selling the house and getting rid of what we thought was essentially everything we owned, we realized we still had way too much and needed to reduce even more! And so began the wall of post-its. This was Shane’s way of taking the to-do list out of his head and making sure it drove me crazy too! Using brightly colored post-its (no they aren’t color coded, just a change in the stack) we each wrote down things we’d like to accomplish before the end of March when we’d move out of the apartment and on to the next phase. Every time a task was completed, the corresponding post-it came down.

We had to sell more of our stuff, order parts for the boat, find a new home for one of our dogs and make arrangements for my photography business. In the next few months, we’d eventually whittle away at the post-it wall until there were only a few left which we ended up tossing as they clearly weren’t going to happen before we said goodbye to the apartment!

In our free time we got completely hooked on several Youtube cruising/sailing channels. For all of those moments when I thought “what the heck are we doing?”, I just sat down and watched my new found support system who are out there doing it! No biggie. Just a boat, a couple of fools willing to try something new and a desire for a different life. We aren’t the only ones. We aren’t completely crazy. There is a community of like-minded fools out there doing it and it’s just a different way to live. It also helped us remember why we were living in a tiny little basement apartment for six months waiting out another long MN winter.

We also spent our time trying to get those post-its off the wall. I brought our interior cushions in to have the foam replaced and the covers cleaned. After two months of sending the covers back for ozone cleaning, the kind that the dry-cleaners do when there is smoke damage, we had to call it. They just simply couldn’t get the smell out of the covers. I’m not gonna lie, my heart was a little broken. It’s one of the things I loved about our boat. That cool turquoise upholstery was her retro outfit that all of the cool kids were currently trying to replicate. So plan-B, I had the new covers made for the cushions. I was willing to make them myself but Shane wasn’t convinced of my mad sewing skills so he insisted we have them made for us. I’m kind of glad he did. Though I know I could have handled the project, we had plenty to do to wrap up that post-it wall!!! I brought the fabric I’d chosen to the guy at the foam place and he had them finished up before we left MN.  We haven’t had a chance to put them on the boat yet and I can’t wait to see how they look in their new home.

Next on the list was to choose a dingy. Being that it will now be our “car” we had some decisions to make. Some considerations when choosing the dingy were…

-type (do we want a hard sided, inflatable, foldable…)

After discussing and arguing our points for and against every option, we decided on a foldable, inflatable from F-rib (foldable rib). We decided it offered the best of options for us. The bottom is rigid and the sides are inflatable. What makes it different than most rigid inflatables is that the bottom folds into itself for storage when the inflatable tubes aren’t in use. It’s a pretty cool concept.

We’d seen them at the Annapolis Sailboat Show but didn’t have a chance to talk with the rep at the time. After many hours of research, we settled on our choice with confidence and started trying to find one. We were able to track down a floor sample in CA and had it shipped to us in MN. It was like Christmas morning and Shane was not going to wait to get the dingy inflated and take it for a spin… in the garage… in sub-zero weather. Things like this just became a normal Friday night of fun for us.

As we waited for our mainsail and genoa to arrive from FL, we went back and forth regarding that darn feathering prop. It’s a lot of $$ but it was high on our wishlist from the start and we needed to decide on it before we put the rudder back on. If I remember correctly, it came down to a good old ro-sham-bo…. and the prop was ordered.

Shane spent a lot of time working on the electronics for the boat. I feel like I really can’t say much about this subject because… I really don’t know much about it even though he’s tried to explain it to me over and over. I’m sure my ears will hear it when we install everything and I have a chance to learn the roadmap. Anyway, this pet project grew and became a two story complex and sat in the corner of our tiny apartment for 5 of the 6 months we were there. 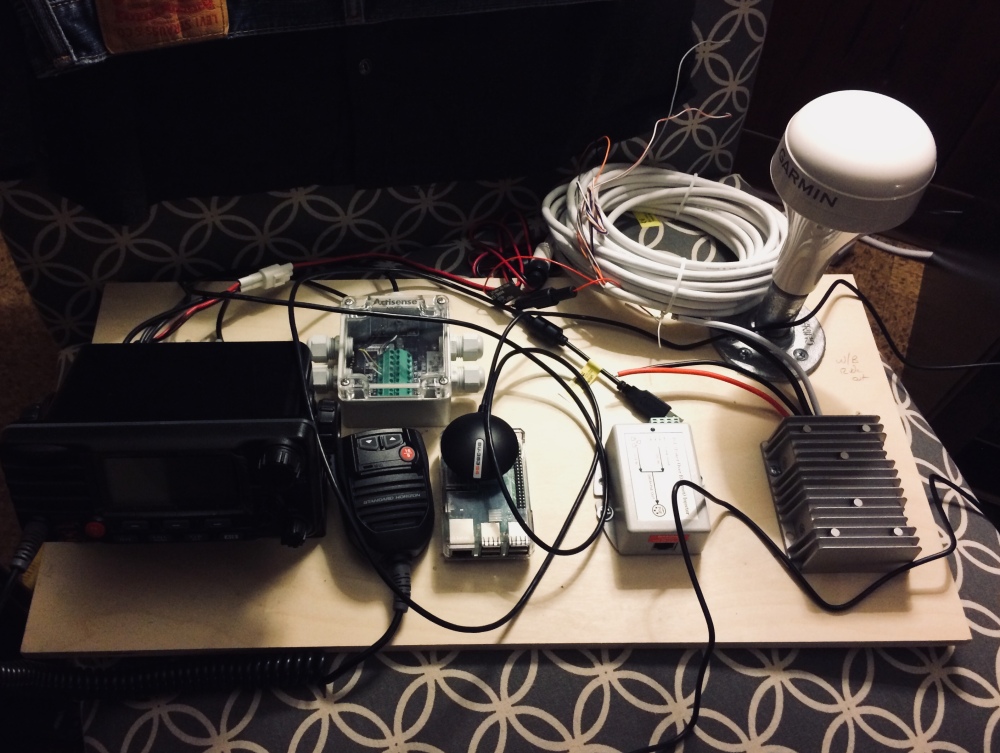 I could say they were the longest six months of our lives but really, they went by fast. The kids came to visit, we celebrated a few holidays with family and quite frankly enjoyed our time squished into that apartment together!